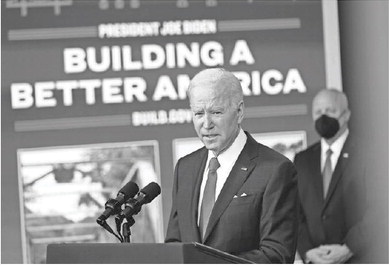 As an informed voter and political junkie, I like to stay informed about what my elected officials are doing for ordinary Americans like me. Here is an example of what our current president is doing for us all.
President Biden ran for our nation’s highest office believing the only way to move our country forward is through compromise and consensus. Last fall, joined by members of Congress and a diverse group of leaders who fought for its passage, he signed the Bipartisan Infrastructure Law.
The Bipartisan Infrastructure Law is a monumental step forward in America’s recovery from the pandemic. It will repair and rebuild the nation’s roads and bridges while strengthening resilience to climate change and creating good-paying, union jobs.
The Bipartisan Infrastructure Law will:
• Start to replace 100% of the nation’s lead pipes and service lines, so every American and every child can turn on the faucet and drink clean water — and tens of thousands of plumbers and pipefitters will get to work in good-paying jobs.
• Make high-speed internet affordable and available everywhere in America — urban, suburban, and rural — and create jobs laying down broadband lines.
• Make the most significant investment in passenger rail in the past 50 years and in public transit ever, meaning Americans will be safer and get where they’re going faster.
• Modernize our ports, airports and freight rail — to make it easier for companies to get goods to market, reduce supply chain bottlenecks we’re experiencing now, and lower costs for working families.
• Build up our resilience for the next superstorm, drought, wildfire and hurricane. It builds back our bridges, water systems, power lines and levees — better and stronger — so fewer Americans will be flooded out of their homes or lose power for days and weeks after a storm hits.
• Create, for the first time ever, a true national network of charging stations for electric vehicles, so you can charge up and drive across the country — creating thousands of jobs for electrical workers.
• Make it possible for America to get off the sidelines and into the game of manufacturing; solar panels, wind turbines and batteries. It will enable us to store energy and power for electric vehicles, including electric school buses, which will mean millions of our children will no longer inhale dangerous exhaust from diesel school buses.
• And, it will reward companies for paying good wages, and for buying American — sourcing their products from right here in America. We can all do our part by paying a little more for American-made products!
Jim Carr is a Millport resident.