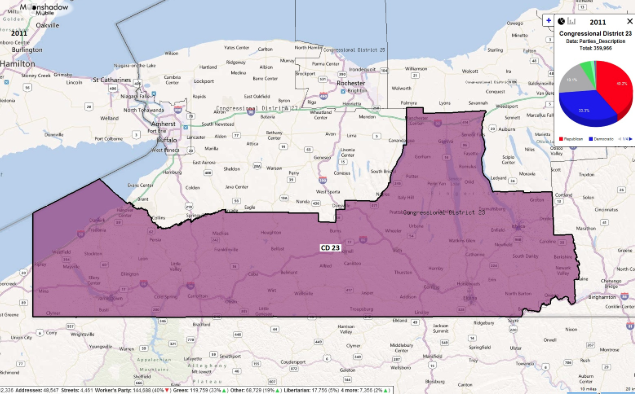 Below is an article by reporter Chris Potter of the Hornell Evening Tribune, with contributions by Jeff Murray.

What’s next for 23rd District? Opinions differ with Tom Reed not seeking reelection

With Tom Reed planning to step aside at the end of his 6th term and redistricting hanging over the 23rd, officials weigh future plans

When Chemung County Executive Chris Moss confirmed Monday he is considering a run for Congress, he may have been the first in the region, but certainly won’t be the last.

Moss’s statements came less than 24 hours after fellow Republican Rep. Tom Reed announced he will not seek reelection in the 23rd District.

The political landscape in the 23rd District shifted dramatically in less than 72 hours when a former lobbyist accused Reed of inappropriate behavior in a Minnesota pub in 2017. The account, detailed in the Washington Post, led to Reed announcing Sunday night that he will not seek reelection.

Reed has been a mainstay in the district for more than a decade. The Corning native said he intends to serve out his sixth term and step aside when it expires Jan. 2, 2023, fulfilling a pledge to only serve for 12 years, though some in the district have called on him to resign immediately in the wake of the sexual misconduct allegation.

Reed did not dismiss the account of Nicolette Davis, stating that his “personal depiction of this event is irrelevant.” In a lengthy response, Reed said he entered treatment in 2017 after recognizing that he is “powerless over alcohol.”

“He did take responsibility for any harm he caused her. He’s taking it seriously,” said Sara Lattin, the acting Chemung County Republican Committee chair. “He is expressing that this is really shameful for him, and that he would never want to cause harm to anybody. That’s not what we’re hearing from (Gov. Andrew Cuomo). Alcoholism is a disease and (Reed) sought treatment for it. It doesn’t make the behavior right.”

Other officials in the district were less forgiving. Dora Leland, Lattin’s counterpart on the Chemung County Democratic Committee, said the allegation is “incredibly disturbing” and thinks the House Ethics Committee should launch an investigation into the matter.

“His comments didn’t really address the issue that this happened,” said Leland. “We hope the House Ethics Committee conducts a thorough investigation into the allegations. If they turn out to be founded, we hope for his resignation. We said the same thing about the governor. You could not get a more bipartisan comparison. It’s the only way to ensure the people of New York get adequate representation.”

Reed’s foe in the past two election cycles, Democrat Tracy Mitrano, also called on the House Ethics Committee to investigate the allegation. The committee has not made any public comment on the matter.

“I don’t believe he gets to drive the narrative solo, especially when it is made under duress,” said Mitrano. “If he came out in 2017 and shared his challenges with the people of this district, I’m sure everyone would be very sympathetic, but it comes out like this amidst a concern that he not have to resign. I’m compassionate for people struggling with addiction, but we also have to see the other side of Tom Reed, and that is his unadulterated ambition.”

Reed has been a vocal critic of Gov. Cuomo, both for his handling of the nursing home crisis and the governor’s own sexual misconduct controversy. Reed was considering a gubernatorial run before Davis came forward.

State Sen. Tom O’Mara (R-58th District) is not calling for Reed to resign, nor have other prominent Republicans in the district. In remarks to WETM TV, O’Mara drew a distinction between Reed’s situation and the allegations against the governor, which have been made by staffers under Cuomo’s supervision.

“The story is he assaulted someone. That should be a shock to anyone even if he gave a very eloquent apology,” said Danks Burke. “My question is, why is he staying in office at all? I think he should resign. He should not be in office. Whether he sees that or not, I don’t know, but to me it’s clear he should resign.”

Whether Reed departs office today, or on Jan. 2, 2023 as planned, before long the 23rd District will have a new representative — or perhaps more than one.

New York is expected to lose one or two seats in Congress based on 2020 Census results, a consequence of continuing population loss. The existing 23rd District could see its borders redrawn, or be broken up, during redistricting.

“That seat was something we were already concerned about because of redistricting,” said Lattin. “We could lose two seats. Without Census data, we don’t know what the picture is yet. It is a very central issue. At the federal and state level, we have one-party rule government. The governor’s race is critical, also. (Next year), 2022, is critical for the Republican Party.”

Mitrano is the only prominent current or former candidate in the district to rule out a run for Congress. O’Mara and Danks Burke both indicated all options are on the table. Both have campaigned extensively in the eastern portion of the 23rd congressional district in multiple election cycles.

“New York is losing two seats in Congress because regular folks can’t afford to live here anymore and are moving out,” said Danks Burke. “That’s on guys like Tom Reed, Gov. Cuomo, and everyone who has stood by while regular people are forced to leave. We don’t even know if the 23rd District is going to exist anymore because of the population loss. That’s because we’ve had terrible representation here, from the county level all the way up to Congress.”

To the western end of the district, Republican state Sen. George Borrello has been floated as a possible candidate, as has his predecessor, Cathy Young. Borrello said serving the 57th Senate District has his full focus and dedication as the state grapples with a budget deficit and other challenges.

“While I wouldn’t ever rule anything out, speculation on the future of this seat is premature,” said Borrello. “Redistricting is a major hurdle that needs to be cleared before discussions about candidates can take place. We are still a long way from that point.”

Redistricting is an unknown for both parties. There’s a chance portions of the district will be absorbed into neighboring districts with established representatives, potentially forcing a primary. Moss said the outcome of redistricting will heavily influence his decision to run for Congress, or for another term as county executive.

“Republicans have traditionally done well throughout the Southern Tier. I’m not sure whether this will change that or not,” Moss said. “We’ll wait and see.”

— Jeff Murray contributed to this report.