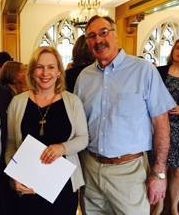 a millennial if Social Security will be there for them! Voting matters and elections have

vote against their own economic and self interests! I am still trying to wrap my head around

the fact that a man like Donald Trump is our commander and chief. The voters have spoke and

now we shall see what comes next. It is never a good idea to give one political party control of

all three branches of our federal government and the future of the Supreme Court. A court

front page titled “ Worry- free retirement is only for a privileged few”. I do agree with the first

line of the article which states “ The American dream of a blissful retirement, free of financial

worries is dying”. The advent of the 401k, IRA defined compensation plans which shifted the

Street is in my open why the American dream of a financially secure retirement is dying. The

echo chamber which historically has demonized defined benefits as well as Social Security,

Medicare and Medicaid is why a worry free retirement is shrinking more and more! This crisis

their own retirement. Because the U.S. households at the top have reaped most of the income

for Americans to save. Decades ago, workers could depend on getting a set, monthly check in

their golden years. In 1979, 38 percent of private sector workers were participating in a

By 2013, only 13 percent of private sector workers were participating in a traditional pension,

most of those workers were participating in both a pension and a 401k or similar program.

traditional pensions. I repeat elections have consequences and a uninformed electorate

policies which will negatively impact us all!