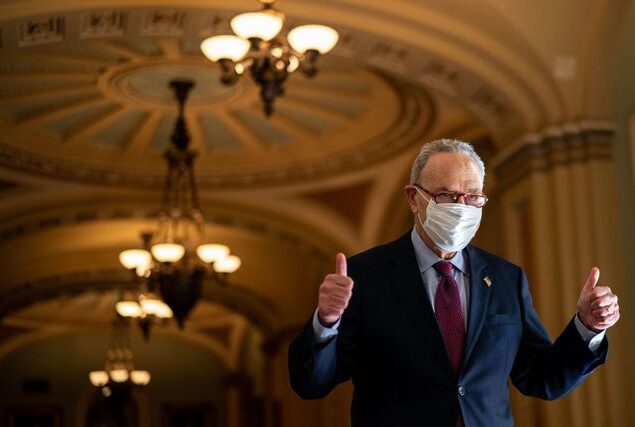 In passing the American Rescue Plan, Senate Democrats have delivered on our promise to take bold action to defeat the COVID-19 pandemic and help struggling American workers, families and businesses get through the next few months, until we can get on the other side of the pandemic.

Earlier today, the engrossment process for the Senate-passed bill concluded, and the text of the Senate-passed legislation was sent to the House of Representatives. We thankfully remain on track to deliver on our promise to get the American Rescue Plan to the president’s desk by the March 14th expiration of enhanced unemployment benefits.

The American Rescue Plan is a bill of historic proportions. It is a $1.9 trillion investment in the American people during a time of crisis, and it will lay the foundation for rebuilding our country after these twelve awful months. It is an eminently people-focused bill, one designed to achieve one of the most significant reductions in poverty in modern American history. According to the Tax Policy Center, the poorest 20% of Americans are estimated to see about a 20 percent boost in income from this legislation, while the wealthiest 1% of Americans will receive an income boost of 0%. That stands in stark contrast to the Republican tax bill, which was skewed in exactly the opposite direction.

A bill of this magnitude would have never happened without all of your tireless work. I am so proud of everyone in our caucus for what they have accomplished over these last few weeks, especially our Committee Chairs whose unflappable leadership empowered us to act swiftly at a moment when Americans needed help fast.

Of course, the work is not done. Over the next few weeks and months, we must take every opportunity we get to explain exactly how the American Rescue Plan will work for the American people. This bill will give President Biden and his Administration an injection of public health resources to crush the virus and vaccinate every American, putting an end to the COVID-19 pandemic that has wreaked havoc in our communities.

I encourage all of us to take time championing the many people-focused provisions that we secured in this bill, including $1,400 stimulus checks for 85% of households, expanded unemployment benefits, and especially the expanded Earned Income Tax Credit and Child Tax Credit, which will soon provide up to $3,000 per child under 17 for an overwhelming majority of families in this country. We cannot be shy in telling the American people how this historic legislation directly helps them.

Over the last month and a half, the American people got to see firsthand what a responsive and effective government looks like. After the country entrusted Democrats with a Senate majority to work on their behalf, I am proud to say that we have delivered in a big way.

Thank you all for your incredible work.

Additional Round of Direct Payments [LINK]