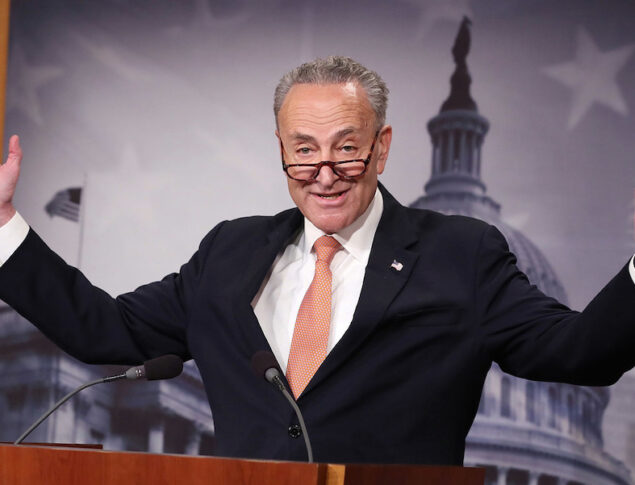 Below is a letter from Senate Majority Leader Chuck Schumer to the Senate Democratic Caucus dated February 19, 2021.
You can see a a facsimile of the letter here.

It has been only a month since Democrats formally took the majority in the United States Senate, but we have already taken major steps to repair and rebuild our nation. At the time, I said that the Senate must address the three immediate tasks: passing urgent and necessary COVID relief legislation, confirming President Biden’s nominees, and conducting a fair and honest impeachment trial.

The new Democratic majority has already proven that we can walk and chew gum at the same time. Even during the impeachment trial, our committees conducted several confirmation hearings and worked closely with their House Democratic colleagues to craft the COVID relief legislation.

On the Senate floor this week, we will continue that work by confirming Linda Thomas- Greenfield to be U.N. Ambassador. Several more highly qualified nominees have been reported out of committee with bipartisan support, including nominees to lead the Environmental Protection Agency, Department of Housing and Urban Development, Department of Agriculture, Department of Energy, Department of Commerce, Department of Education, and Department of Labor. With the cooperation of Republicans, we can confirm these nominations quickly. President Biden deserves to have his team around him as he tackles the defining crises of our time.

In addition to confirming highly-qualified nominees to the executive branch, the Senate will continue developing President Biden’s COVID-19 relief legislation, the American Rescue Plan. In coordination with our Senate committees, the House is finalizing the legislation for consideration on the House floor later this week. Please continue to provide feedback and ideas to my office and the Senate committees for the bill. We have already incorporated many of your suggestions, as well as a number of bipartisan proposals, into the bill and the Senate is on track to send a robust $1.9 trillion package to the president’s desk before the March 14 expiration of Unemployment Insurance benefits. We will meet this deadline.

The provisions in the emergency COVID relief package – to keep families out of poverty, safely reopen schools, distribute the vaccine, crush the virus and more – are broadly popular with the American people and Republicans should not oppose or delay this much needed assistance. If Republicans are ready to work with Democrats on constructive amendments that will improve the bill we are ready to work. However, we must not allow Republican obstructionism to deter us from our mission of delivering help to Americans who desperately need this relief.

Make no mistake: the era of Mitch McConnell’s legislative graveyard is over. Under Democratic leadership, the Senate is marshaling the resources of the federal government into action to defeat the pandemic, recover our economy, and crush the virus. Senate Committees, under the leadership of our new Chairs, have already started holding hearings and planning legislation to tackle climate change, rebuild our infrastructure, create good-paying jobs and much more. I am looking forward to our ongoing caucus discussions about how we can continue to work on behalf of all our constituents and work with our Republican colleagues to pass bipartisan legislation.

I know many of you have bipartisan bills that will deliver meaningful change for our country. It is my hope that the Democratic-led Senate will be able to debate these important bills, but it will take bipartisan cooperation to pass legislation and confirm nominees swiftly. Americans sent us here to work on their behalf, and I am committed to working with every Senator who wants to work in a constructive way to move America forward.