Press release on ‘May the Fourth Be With You’

Ed Bond, a Horseheads resident, entrepreneur and inventor, announced May 4, 2018, that he will be pursuing the 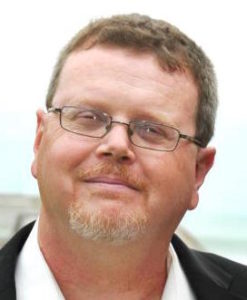 Democratic nomination for the 4th District of the Chemung County Legislature.

Bond is also a former reporter for the Star-Gazette in Elmira who had spent 25 years in journalism as a writer, copy editor, page designer or journalism professor. After getting his master’s degree in journalism from Indiana University, his first full-time job was to cover the Steuben County Legislature and other local news for the Star-Gazette. That experience had been an invaluable education in public affairs, Bond said.

His next job was to cover the city of Burbank for the Los Angeles Times. He then took over a series of columns for the Times about the people in the community who made a difference in the world. He left the Times to become a community college journalism professor, but in the meantime he also helped launch a newspaper in Santa Monica called The Observer.

He had met his wife, Amy, in the newsroom of the Star-Gazette, where she had been an editorial assistant. In 2001, they moved from Los Angeles to Horseheads, where Amy had grown up. Ed took a job as a copy editor at the Star-Gazette and occasionally wrote opinion pieces and columns for the paper. He also taught at Ithaca College on either part-time or short-term assignments.

“I’m running for office because unchallenged elections – or elections decided only in primaries – are unhealthy for democracy and open government. People deserve a choice. In uncontested elections, large segments of the population do not get a chance to be heard. Many don’t bother voting. They feel like their votes don’t count. They feel helpless.”

“If you want to ensure openness in government, improved communication and have a representative willing to listen to people, elect a former reporter,” Bond said.